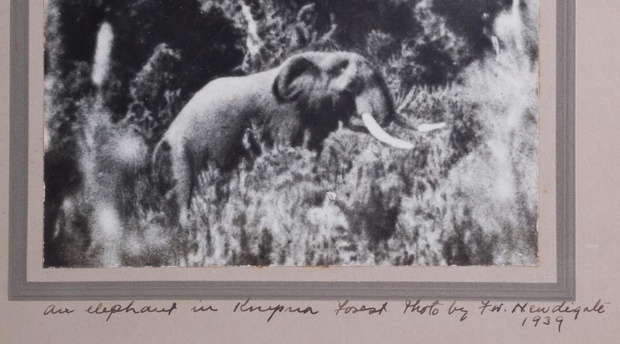 The elephants that live in Knysna forests are a constant and mysterious part of life here in the Garden Route. We know they’re there, we hear stories about them all the time, and they feature prominently in our art and our literature. But we see them so rarely that any photograph of them - no matter how blurry or vague - is almost guaranteed to go viral.

The experts disagree as to the size of the herd (if indeed it is a herd), but they can agree on this: the elephants future - and ours - depends on how we treat their environment.

And this is what the Forest Elephants display in the Knysna Museum’s Old Gaol is really all about.

We humans have never got on very well with the Knysna elephants - or perhaps it would be better to say that they never got on well because of us. In 1782, for example, the French explorer and naturalist, Francois le Vaillant, spent six months in the Garden Route (Outeniqualand in those days) to catalogue its plants and animals, its fishes and its insects - but he was also the first person to shoot one of the elephants of the area (at Die Poort, between Plettenberg Bay and Knysna).

And they didn’t stand much of a chance after that.

The elephants didn’t always live in the forests (there’s far better feeding in the surrounding vegetation), but they would have retreated into them in the 19th and early 20th Centuries when the hunting - for sport, for ivory, because people considered them a threat - became relentless.

The devastation didn’t go entirely unnoticed - but the few lonely voices that did speak up went unheard. The Cape Colonial Government, for example, paid no attention in 1870 when the Conservator of Forests, Christopher Harison, estimated that the Southern and Eastern Capes population of elephants had dwindled to only about 400 individuals. (The elephants’ range wasn’t limited to Knysna: the whole Garden Route from Knysna to the Tsitsikamma to Addo - north-east of Port Elizabeth - was considered ‘elephant country’ in the early days.)

But men needed land! - So the hunting continued.

The farmers in Addo, for example - who’d bought their farms at reduced prices exactly because of the threat of the pachyderms - complained about them, which prompted the Administrator of the Cape, Sir Frederic de Waal, to decree that they should be eliminated altogether.

The job fell to Major Philip Jacobus Pretorius, who shot more than 120 of them before good sense finally prevailed, and the government decided to spare 16 of them, confining them to the Addo Reserve (now part of the Addo Elephant National Park).

Didn’t stop Pretorius though: he applied for - and received - permission to shoot just one more of those last sixteen. And promptly went ahead and slaughtered five of them.

The natural history museums wanted the specimens, don’t you know! And the ivory was worth a few pennies in his pocket, too.

Back in the Knysna area, the elephants seemed OK at first - especially since the Government had decided to close the indigenous forests to felling (they remained off limits for woodcutters from 1939 to 1967, which gave them an opportunity to rejuvenate, given that they themselves had been pretty devastated by harvesting over a period of around 150 years).

Concerned that no one knew the real status of the Knysna elephants, a working group of the Eastern Cape branch of WESSA (the Wildlife and Environment Society of Southern Africa) commissioned a survey of the Knysna herd, which concluded that there were between seven and ten individuals in our area.

The game warden Nick Carter, author of The Elephants of Knysna (Purnell, 1971) made two surveys around this time: in the first he estimated that about 14 individuals had survived, but in the second he concluded that only ten had made it. And, with the birth of a calf shortly after he’d finished his work, he also suggested that the elephants were breeding normally, that the population size had remained static for 50 years, and therefore that all was good with the world.

Except it wasn’t. In 1971 members of the forestry department shot an ageing bull and, by 1980, the department allowed that only two individuals survived in the Knysna area: a cow (which later became known as The Matriarch), and her calf.

This galvanised the establishment of yet another working group - in 1981 - which came up with the idea of bringing four elephants from Addo to Knysna. But the Government made it quite clear that it wouldn’t take responsibility if the animals caused any damage (to this day, the Knysna elephants remain unfenced) - so the working group faded quietly away.

In 1986, though, Daleen Matthee published her remarkable, bestselling novel, Kringe in ‘n Bos (Circles in a Forest), which, together with Regardt van den Bergh's 1989 film of the story of the woodcutter Saiul Barnard and his connection to the old forest elephant, Ou Poot (also titled Circles in a Forest) helped revive interest in the plight of the Knysna elephants.

Another working group was formed, and this time the government did agree to allow outside elephants to be imported to the Knysna Forest.

Three cows were this captured and transported from the Kruger National Park in 1994. After a period in a holding boma, they were released in the Diepwalle section of the forests (on the Prince Alfred’s Pass, about 20 km by road from Knysna).

One of them died almost immediately, and the others moved out of the deep forest, preferring to feed on the pastures on nearby farms - and damaging, them, of course.

And so the panjandrums organised once more: this time (in 1999) they captured the surviving Kruger cows, and removed them to Shamwari Game Reserve in the Eastern Cape.

From then on, the official position was that there remained only one elephant in the area - but in 2000, forest guard Wilfred Oraai saw and photographed a young bull from a distance of only about 30 metres. This prompted the author and independent researcher, Gareth Patterson, to begin searching for the Knysna elephants in the following year, and to publish his findings in his 2009 book, The Secret Elephants: The Rediscovery of the World's Most Southerly Elephants (Penguin Random House South Africa).

For seven years, "he covered thousands of kilometres on foot, following ancient elephant paths through the dense Afromontane forest and the surrounding mountain fynbos. He found abundant signs to suggest that, far from dying out, the Knysna elephants are, quietly and secretly, holding their own. Patterson's fieldwork, and his DNA research in collaboration with conservation geneticist Lori Eggert, established that at least five young females exist, lending support to Patterson's growing evidence that the Knysna forest and its surroundings are home to a small herd of young elephants.” (Penguin)

Many officials and local conservationists disagreed with Mr. Patterson’s findings - but either way, the good news for any elephants that might still be living in the Knysna forests is that much of their range is now protected as part of the (also unfenced) Garden Route National Park, which was established on 6 March 2009, and which includes about 121,000 hectares of the land between Wilderness and the Tsitsikamma.

Update (July 2021): Ancient evidence for elephants in the Southern Cape

In, Morphology of Pleistocene elephant tracks on South Africa's Cape south coast and probable elephant trunk-drag impressions, published online by Cambridge University Press during June, 2021, Charles Helm and others discuss fossil trackways as evidence for the presence of elephants in the Southern Cape.

'They point to a significant regional elephant presence from Marine Isotope Stage (MIS) 11 (~400 ka) through MIS 5 (~130–80 ka) to MIS 3 (~35 ka) and also indicate repeated use of certain dune areas. They buttress Holocene and historical evidence that elephants made use of open areas in the region, and that the remaining “Knysna elephants” retreated into dense afrotemperate forest for protection in recent centuries.'

Video: Gareth Patterson and the Search for the Knysna Elephants