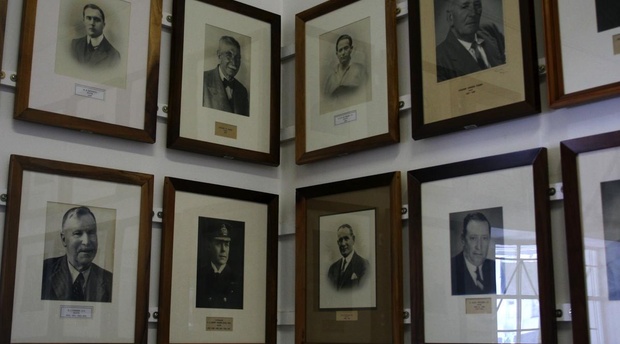 The Municipality Knysna grew out of two separate but neighbouring villages on the banks of the Knysna Estuary: Melville, which was situated west of the present-day Long Street (and which was named for Henry Dundas, 1st Viscount Melville - at that time treasurer of the Royal Navy), and Newhaven (um... east of Long Street).

Things took their time in those days in Outeniqualand. With settlement growing in the area, (albeit slowly) plans were drawn up for the establishment of the village of Melville as early as 1825 - but the Admiralty, which owned the land, didn’t transfer it to the Colonial Government until 1862. So it took about 37 years for the title deeds to be be drawn up.

Newhaven (the name should be self-explanatory) was laid out by John Sutherland in 1845, and the villages existed side by side (well, across the road from one another) until 1881, when the locals decided to merge them.

They met in November, 1881 and elected a chairman and four commissioners to act as interim councillors.

The Governor of the Cape recognised the Municipality of Knysna under Proclamation No 217 of 1882 - and Thomas Horn was elected chairman of the first official Council, which held its first meeting on the 14th of March, 1883.

But that didn’t mean that Municipal matters suddenly started speeding up: the Council took a decision in 1898 to install the town's piped water system - but the first water only actually flowed through them in 1926...

Although that probably wasn’t necessarily the fault of any of our mayors.

Portraits of most of the mayors of Knysna hang in the entrance of the Old Gaol.

Here’s a list of all of them - with some notes about those who made exceptional contributions to the town: