All humans alive today stem from one small group of individuals who - genetic research has shown - lived in Africa less than 200,000 years ago.

And we now know that those people lived here, on the Garden Route coast - thanks to the work of the South African Coastal Palaeoclimate, Palaeoenvironment, Palaeoecology, and Palaeoanthropology (SACP4) Project, under Curtis Marean, an associate director of the Institute of Human Origins and professor at the School of Human Evolution and Social Change at Arizona State University.

At first, the SACP4’s studies concentrated on the Pinnacle Point Caves in Mossel Bay, but (as in all things) the more we learn, the more we realise that we have even more to learn - and the work has now extended to various other sites along the coast, and further inland.

This is exciting news for Knysna, which has now been identified as one of the sites of interest, and which has been studied by a team lead by Dr. Naomi Cleghorn, an Assistant Professor in the Department of Sociology and Anthropology at the University of Texas at Arlington, since 2014.

“The Knysna estuary has been a focal point for human activity at least since the mid-Pleistocene [± 1.5 ma], and thus offers a potentially valuable long-sequence landscape-use perspective within a small, well-defined area. The multiple sites identified around the Heads would have provided distinctly different advantages, and give us a useful means to assess the strategic choices of Stone Age foragers.” (Cleghorn et al)

The physical positions of the caves on opposite sides of The Heads offered their occupants different strategic advantages at different times, depending on prevailing sea levels.

During low sea-stands, when the seashore lay between 75 and 90 km south of its current position, the high-lying (± 23 metres above mean sea level), south-facing caves on the Eastern Head would have enjoyed commanding views of a broad coastal plain - while the low-lying caves on the Western Head would have looked onto the narrow poort or defile (now The Heads) through which the Knysna River would have flowed, and which would have formed a natural ambush site or “choke point” for any animals moving in a north-south direction.

During periods of high sea-stands (as today), the caves on the Western Head would have enjoyed direct access to the rich resources of the ocean and the estuary.

The focus of research leading up to the publication of the 2014 poster concentrated on deposits laid down in the caves in the period between about 23,260 years before present (BP), and 44,960 BP.

The deposits in the caves from these ages are characterised by hearths (cooking fires), and reveal quartzite, quartz, and silcrete lithics (stone tools); pieces of marine shells and ostrich egg shells; evidence of the utilisation of small and large animals; ochre (which may have been used as paint); and charcoal.

Anticipating further work in the area, the archaeologists wrote in 2014 that, “Research at Knysna will also provide new data on the poorly understood period from 40 kya to the LGM.” (LGM = Last Glacial Maximum: between 26,500 years and 19-20,000 years ago - Wikipedia; kya = thousand years ago.)

Publications that have appeared in the period since 2014 shed further light on the Middle Stone Age in Knysna:

The authors studied a site that was occupied during the transition from the Middle to the Later Stone Age - that is, around 46,000 to 18,000 years ago. This was also a period when the distance to the coast changed quite radically: from 5 km away, to 75 km away. The deposits in this site therefore offer, “a unique glimpse into forager technology, subsistence, and mobility.”

“The position of the sites on the shallow South African coastal shelf offered occupants potential access to riverine, coastal, and terrestrial resources, as high and low sea stands drastically altered the location of these resources. It has been hypothesized that the dearth of sites dated to MIS 2 [2,000 - 29,000 years ago - Wikipedia]  on the south coast, a time when the ocean was 75-90 km distant, is due to a preference for dense and high protein marine resources, drawing early modern humans out onto the now-submerged Paleo-Agulhas plain.”

Ms. Keller postulates various reasons why the cave in which she conducted her work would have been attractive during this time: 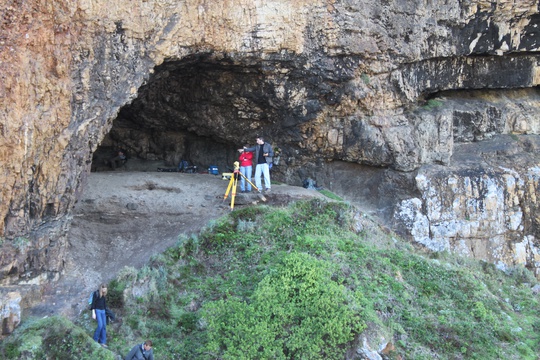 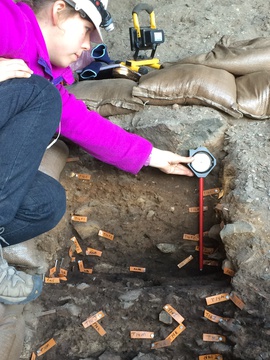 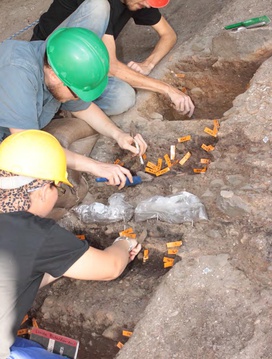 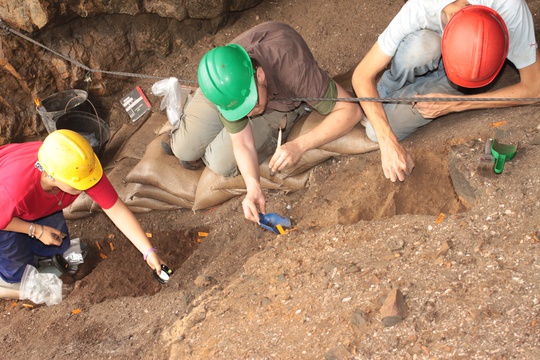 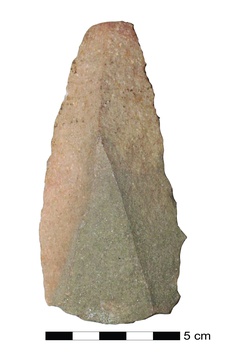