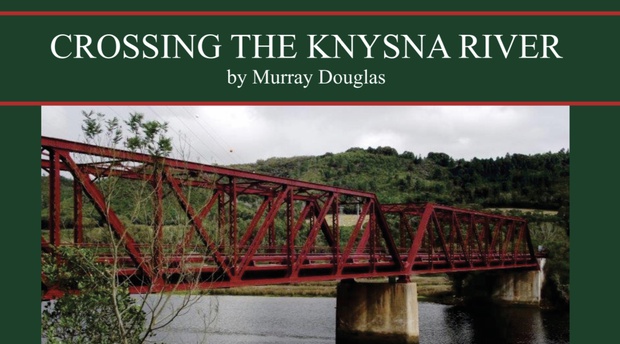 The stories of the drifts, causeways, ponts, ferries, and bridges that have connected Knysna to the world to its west.

The early history of Knysna is very much a history of how we’ve always struggled to cross the Knysna River.

This book, written by retired civil engineer and Sedgefield resident, Murray Douglas, takes us from the time the first ox-wagons were wrestled across the water at The Drift in the 1770s, to our high-speed dash across the White Bridge today.

The area that modern residents of Knysna call ‘The Drift’ was known previously as The Krantz - and it was here that anyone travelling eastwards towards, or westwards away from Knysna would cross the River: but only at low tide.

At high, the water is often far too deep.

The challenges of getting across were, for example, described a number of times in the 1834-1857 journals of the settler Thomas Duthie, who lived at Belvidere on the western shore of the Knysna Lagoon, and had often to visit his father-in-law, George Rex, who farmed on the eastern shore.

Sometime before 1852, a number of private individuals came together to build a pontoon, which served road users who wanted to cross the River at The Drift until 1880.

In 1860, though, the road-building pioneer, Thomas Bain, had settled in at Old Place (previously the Rex home), “concerned with improving the roads in and through the little village.”

Employing about 200 convicts and another 50 men besides, he built “houses, stations, offices, and so on” - and both the Phantom Pass (which improved access to The Drift from the western side), and, in 1880, a causeway across The Drift.

Crossing the Knysna River: the bridges

Although the causeway was built using “large stones, too heavy to be shifted by the pull of the water,” it wasn’t a very comfortable or practical solution, and in 1892 the Divisional Council of Knysna called for tenders for the construction of a timber bridge two kilometres downstream.

This elegant construction was opened on 4 April 1893 by Mayor C.W. Thesen, and was operated as a toll bridge. The first toll keeper was the gentlemanly Robert Tothill (Indian Army, retd.), who served faithfully until his death at the age of 75 years on 18 April, 1911 - and he was still collecting tolls on the morning he died.

In that same year, though, it became clear that the bridge had been infested by toredo worms (or naval ship worms), and the George and Knysna Herald reported that, “the traction engine belonging to the Divisional Council is not allowed to cross it, even if drawn by a team of oxen.”

The economy of the area having grown, therefore, the task of replacing the wooden bridge was taken up by the Union Government’s Public Works Department, which issued tenders for the construction of a new bridge in 1912.

This would become known as the Concrete Bridge.

Despite delays caused by foundations that settled and that had to be shored up by additional pilings, this new “plate girder steel bridge of eight 40 ft. spans,” which cost £8,150,was opened to traffic on 1 November, 1915. (40 ft = 12.19 metres)

The bridge’s spans had been blocked in the floods by the carcasses of floating bushes and trees “up to 7 ft. in diameter, and 150 ft. in length,” and the pressure had caused the piers to collapse and wash away - and Knysna was inaccessible from the west once more. (7 ft. = 2.13 metres; 150 ft. = 45.7 m)

For the next few years, the only way for motor vehicles to cross the water was via a rickety, hand-hauled pontoon that had originally been installed on the Keurbooms River, near Plettenberg Bay, in 1881. Fortunately for Knysna, though, this contraption was in the process of being replaced at the time of the floods, and it was moved here as a temporary solution while the Cape Provincial Administration designed, and then built (beginning in 1918), the well-known Red Bridge that would become something of an icon of the town.

Although the officials called it the Knysna River Bridge, the locals called it the Westford Bridge - but we renamed it in honour of the deep red colour of its metal frame quite soon after it was opened to traffic on 1 May, 1923.

While all this was going on, though, the people of Belvidere, a few kilometres downstream, benefitted from a ferry service operated by a Mr. Tinnie Lawrence - a simple row boat that carried foot traffic to and from The Point from 1920 to 1945.

“He lived at Belvidere on the slopes above Ferry House. If he was working in his garden, and happened to look up and see the signal for the ferry - a white disc mounted on a pole at The Point - he would come down to his dinghy and row across to fetch you for 6d.”

The Red Bridge continued to carry local traffic until 1973, when it was closed to vehicles. But, since it now carries two raw water pipelines from the weir upriver on Charlesford Farm, the Knysna Municipality refurbished it (and refreshed its happy coat of deep red paint!) in 2014 - and it’s still used by pedestrians and cyclists to this day.

The first portion of the White Bridge was constructed in 1955, when the Cape Provincial Administration built the N2 national road from Knysna to George to replace the old and tortuously narrow 7-Passes Road. (See our review of Murray Douglas’ companion work, ‘The Old Roads Between George and Knysna,’ on this site.)

By the 1980s, the narrowish White Bridge had itself become inadequate for the growing flow of traffic using the N2, so the Department of Transport built a second bridge - adjacent to and immediately downstream of the original.

Mr. Douglas, though, worries that people still don’t believe that The White Bridge is actually made up of two bridges in one - but he has a solution: he’s included no less than eight of the original engineering drawings of the second bridge in his book.

And, together with numerous other drawings, photos, and newspaper cuttings - and far more technical detail, and many, many more stories than we have room for in this article - they offer an absorbing look at the way the community of Knysna has tackled its way across the river at its heart. 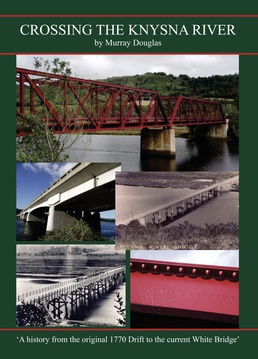 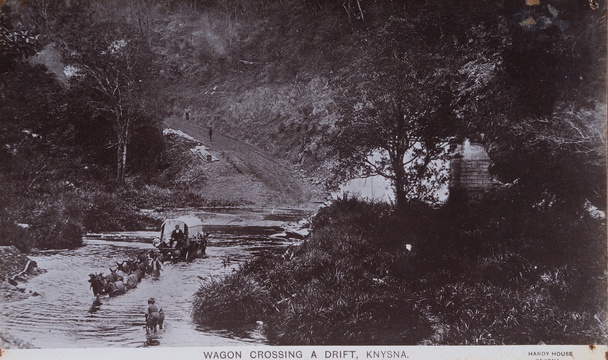 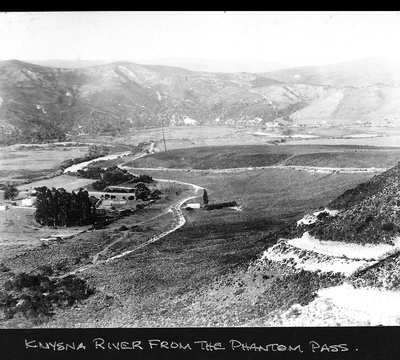 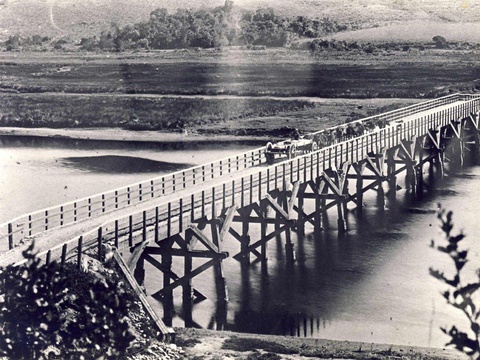 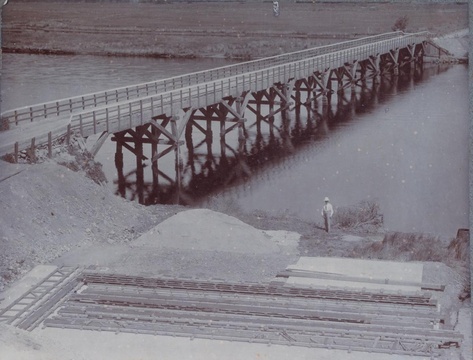 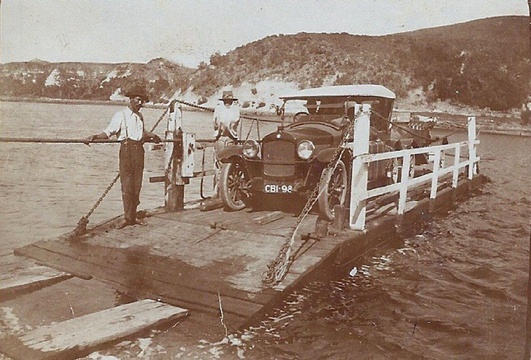 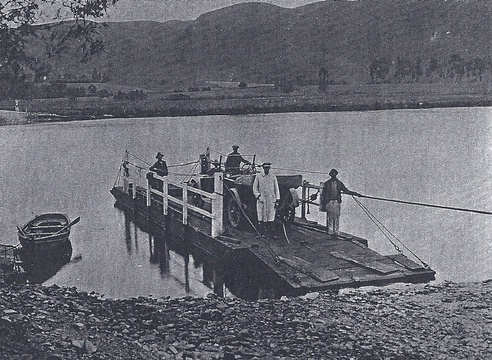 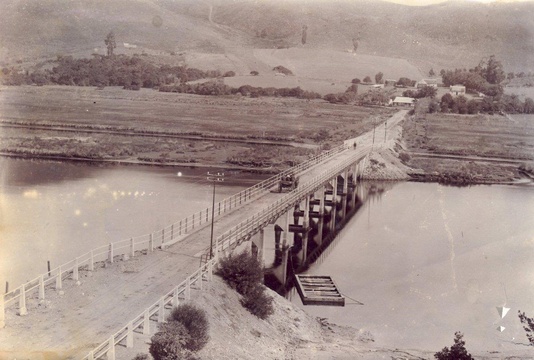 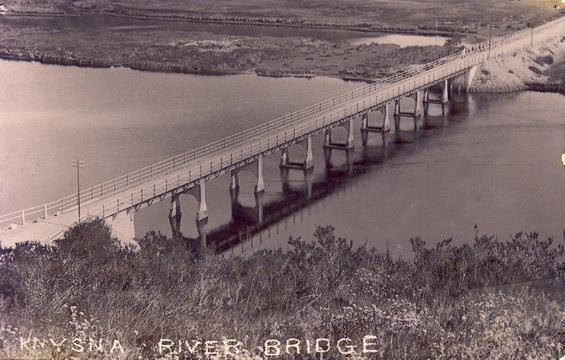 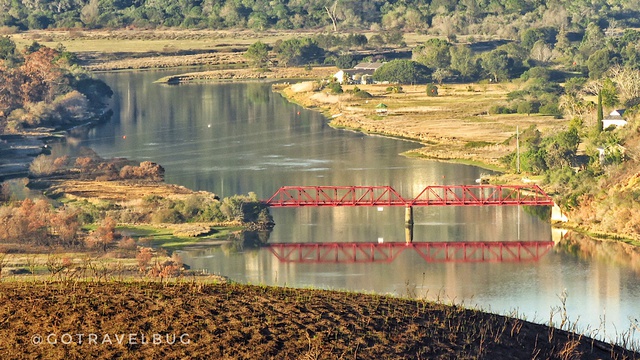 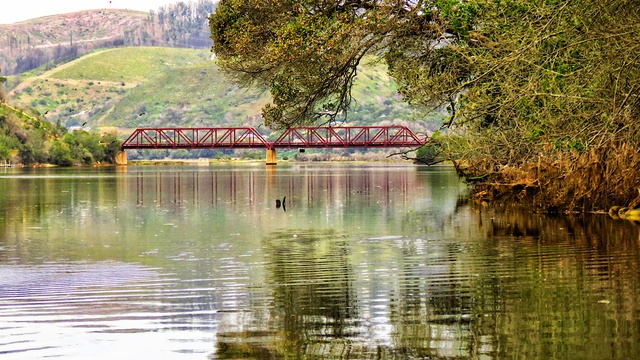 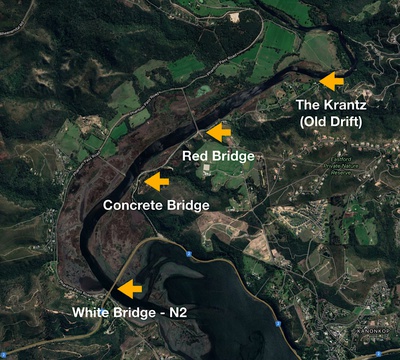