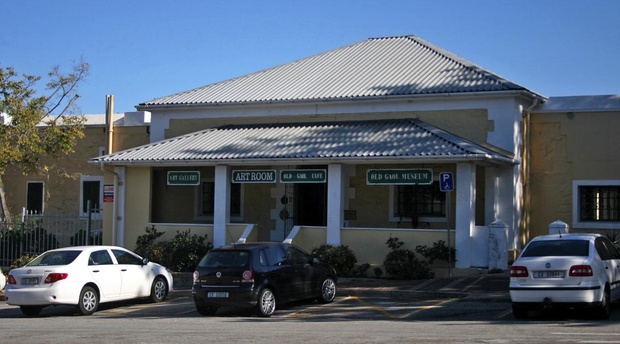 When Sir George Grey (Governor of the Cape Colony from 1854 to 1861) ordered all of the Colony’s Divisional Councils to obtain plans for building jails in their regions, James Fichat, the Civil Commissioner for the Cape Colony and resident magistrate for the Knysna area, set to with a will. The town needed such a facility because, amongst other things, the great roads engineer, Thomas Bain, was about to begin building the Prince Alfred’s Pass - the mountain road that now links Knysna with Uniondale - using convict labour.

The Municipality of Knysna hadn’t been declared in those days - it would only come into being in 1882 - and what we now know as the old part of town was then two separate villages: Newhaven to the east of Long Street, and Melville to the West.

Mr. Fichat bought four plots of land in Newhaven for the jail from a Mr. John Sutherland for the sum of £56, the Government’s Department of Civil Engineers drew up the plans, Sir George made a budget of £500 available - and the project was on its way.

The first group of 50 convicts who would build the jail arrived aboard the privately-owned steamer, ss Zulu, on 21 August, 1858. Marked by an official three-gun salute, this was also an important occasion for an entirely separate reason, though - it was the first time a steam-powered ship ever entered the harbour.

The prisoners had come from Zuurberg in the Eastern Cape, and had boarded at Port Elizabeth. They were housed in Knysna in a wooden store on the farm Melkhoutkraal (now the area that includes Lower Old Place, Industria, and the Knysna Golf Course), and their rations were purchased for them from local merchants.

The foundation stone for the building was laid during an impressive ceremony on 19 February, 1859. The town and the ships in the harbour were decorated with flags and bunting, and most of the residents turned out for the party, which began with a procession from the old schoolhouse that stood then to the north of St. George’s Church.

The procession was lead by the head mason of the building team, followed by local Freemasons in full regalia, and Mr. Fichat, the Reverends Squibb of St. George’s and Roubaix of the Dutch Reformed Church, and many other local dignitaries.

The builders themselves - many of whom were Malay Muslims - sprinkled water on and under the foundation stone, Mr. Fichat made a speech, the Reverend Squibb offered up a prayer, the Freemasons performed their rituals, and after three cheers for Magistrate Fichat, the proceedings were over.

Layout of the building

The Gaol was originally built with quarters for the wardens, a turnkey room (now the entrance to Queen Street), a kitchen, eight cells, a women’s yard, a hospital yard, an awaiting trials yard, and two store rooms.

The first foreman on the project - Irish immigrant Thomas Armstrong - was forced to retire due to illness, and his replacement - Knysna resident Charles Currey - was drowned in 1859 when trying to cross the Knysna River. His grave lies in the south-west corner of the churchyard across the road from the Old Gaol.

We don’t have much information about the lives of the prisoners who were jailed here, but one story that’s done the rounds in Knysna for years has it that well-behaved individuals were allowed to go home for the weekends.

An urban legend? We don’t know - but it’s nice to think how it might have been if it were true!

On a much sadder note, though, Knysna’s Old Gaol did serve as the last home of one poor soul - known in the records only as ‘Jacob’ (and we’re not even sure of his crime) - who was executed by the state.

The gallows that were used for his killing were brought from Cape Town to Knysna aboard the ss Kadie, and set up in front of O’Reilly’s Bush - the stand of indigenous trees at the northern (top) end of Queen Street - where Jacob was hanged on 31 May, 1860.

The Gaol in village life

Since it was the only government building in Knysna for some time, it’s natural that it would became something of a centre of official village life. Its bell was used as a fire alarm, and from 1883 onwards it would peal twice to announce the delivery of the post - but 15 minutes ahead of time to warn the waiting hopefuls to get off the stoep (verandah), and thus avoid congestion.

The Gaol was also one of first two buildings (together with the Government Residency) that received piped water when that service was introduced to the village in 1902. This would become particularly important in the 1920s and 30s because, apparently, the Gaols garden was something of a showpiece for Knysna.

The Old Gaol was retired from service in the 1980s, when a new prison was opened to the north of the town, and the property was transferred from the Department of Public Works to the Municipality of Knysna, which converted it into an art complex with exhibition spaces that form part of the Knysna Museum (together with the four historic buildings on the corner of Queen and Clyde Streets - Millwood House, Parkes Shop, Parkes Cottage, and the Pitt Street House).

The Old Gaol is owned and managed by the Municipality of Knysna (see our About page).