An Earlier Stone Age site exposed by fire reveals evidence that people have lived in Knysna for well over 300,000 years

People have lived in the Knysna area for hundreds of thousands of years - at least since the later part of the Earlier Stone Age. And while scientific research in the Knysna region has concentrated on our more modern ancestors - those who lived during the Middle Stone Age - we do know a little about those earliest inhabitants.

The Earlier, Middle, and Late Stone Ages in Africa

Archaeological evidence suggests that hominins first began manufacturing stone tools in Africa more than 3 million years ago, with the earliest tools appearing in South Africa around 2 million years ago. This long period of history is divided (very broadly) into three periods:

Work on the south coast of South Africa - at sites such as Pinnacle Point and others (including Knysna) - has revealed the earliest evidence for modern human behaviour, which emerged during the Middle Stone Age.

“Most of the information we have about the activities and technological skills of Stone Age people is thanks to the durability of stone tools that not only provide evidence for the presence of humans, but more importantly, encode human technological achievements during more than 99% of the history of our genus. The characteristics of this long and probably continuous history of human occupation of an extensive landmass have been influenced to some extent by changes in demography, socioeconomic factors, and environmental variations affected by geology, geomorphology, climate, fauna and flora. The result is an extraordinarily rich and complex record of social and technological changes throughout the Stone Age.” (Lombard, Marlize, et al. “South African and Lesotho Stone Age Sequence Updated.” The South African Archaeological Bulletin vol. 67, no. 195, June 2012)

Klein goes on to note that, “Only about 20 sealed ESA sites are known in southern Africa, and all but 3 or 4 probably postdate 1 mya. Surface occurrences are far more abundant [as in Knysna], and together with the sealed sites, they suggest that ESA people colonised the cooler, southern, and drier, western regions of southern Africa only after 1 mya.”

Tools evolved only slowly during the Acheulean, although they did tend to become “conspicuously thinner, more symmetrical, and more extensively trimmed.” (Klein)

Since this was the period preceding the emergence of anatomically modern humans, “Rare human fossils confirm that southern African ESA people were members of the evolving genus Homo, and some may have been on or near the line to modern Homo sapiens.” (Klein)

That Knysna would have presented an attractive resource to Earlier Stone Age (Pleistocene) foragers is clear from the number of bifacially flaked core tools (hand axes, etc.) that have been found on exposed sites in the uplands surrounding the Knysna basin.

However, most of these local finds have occurred on disturbed ground on farms or in plantations, or in areas where housing or other developments have taken place. Until recently, very few if any of them have thus been properly recorded. Also, the density of the indigenous (and even invasive) vegetation in undisturbed areas would have hidden any undisturbed stone tool sites from view.

But in June 2017, fires that swept through more than 20,000 ha of the Garden Route and reduced much of the vegetation to ashes, did uncover one such undisturbed site: at an elevation of about 174 metres above sea level on Featherbed Private Nature Reserve on the Western Head of the Knysna Estuary.

The horticulturist managing the rehabilitation of the fynbos on the reserve, Martin Hatchuel, reported the find to Dr. Naomi Cleghorn, an Assistant Professor in the Department of Sociology and Anthropology at the University of Texas at Arlington, who has led a team researching the Middle Stone Age in Knysna since 2014.

Dr. Cleghorn and her team mapped the Featherbed site in 2018 in a ‘catch-and-release’ survey, and placed it in the context of the Earlier Stone Age in South Africa. (In catch-and-release archaeology, artifacts and their positions are noted and recorded with little or no excavation, and with nothing permanently removed from its position. This method is used in order, amongst other reasons, to preserve the integrity of the site for future research.)

102 Earlier Stone Age artifacts were found scattered on the surface of the stabilised Pleistocene dune:

The team made high-resolution measurements of the coordinates of each artifact (“with a Topcon HiperXT GPS Unit and RTK Receiver, used in conjunction with a Topcon Total Station” Butts, et al - see below), and also collected data about the physical size and shape of 25 of the large cutting tools found on the site. This data was then compared with similar data from other South African ESA sites using the Archaeology Data Service’s Acheulean Biface Database, which contains information about more than 1,500 tools from South African ESA sites, including Cape Hangklip, Montagu Cave, Elandsfontein, etc.

The ESA site on the Western Head: research results

Butts, et al* write that “Open air sites like this are poorly represented along the southern coast in the Western Cape due in part to the thick shrub vegetation common in this region (Chase and Matthews, 2007). The ESA open air site at Featherbed Private Nature Reserve thus provides a unique insight into early hominin behavior in coastal South Africa.”

They note that the large cutting tools (LCTs) found on the Western Head are “generally more refined, but similar in elongation compared to other ESA sites in South Africa.”

This high refinement index is thought to be due to the fact that the tools are “in the early stage of their use-life. This is supported by the lack of retouch and edge damage. Artifacts at the Featherbed ESA open air site appear to be in primary context (based on core refits) - a rarity for most ESA open air sites.” 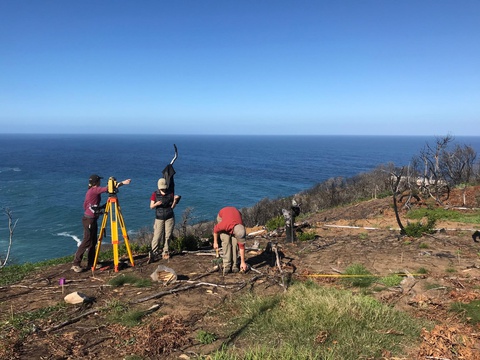 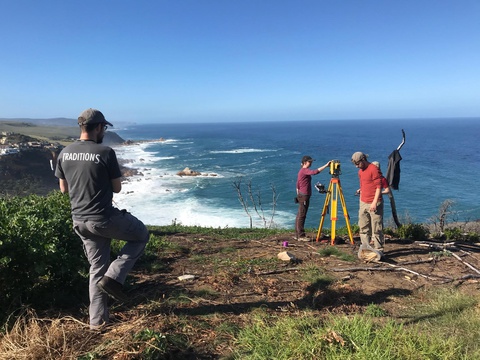 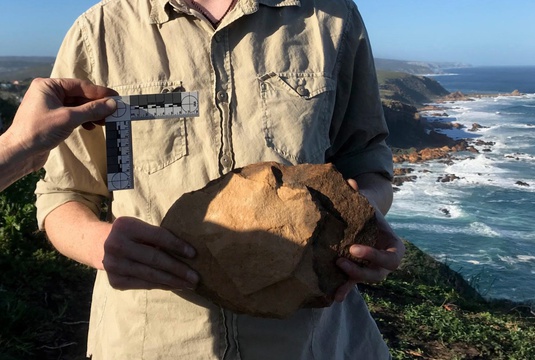 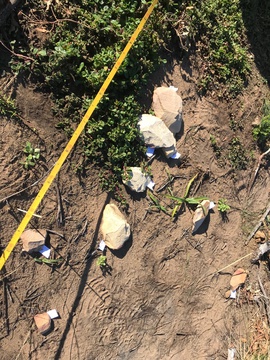 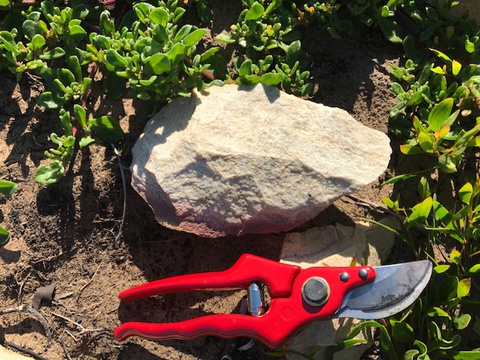 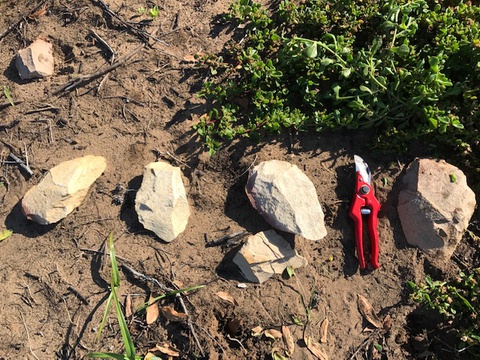 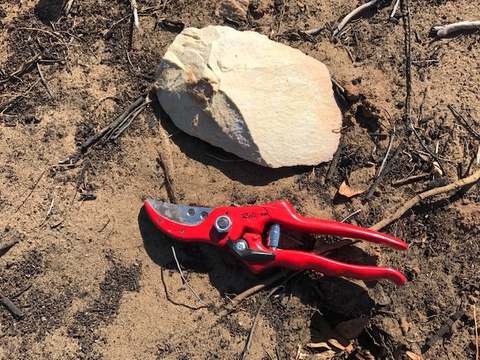 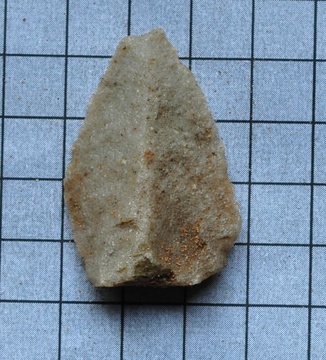 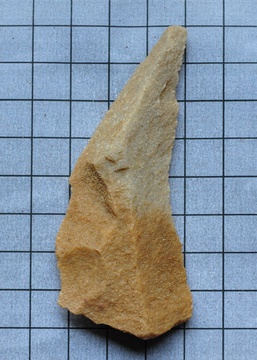 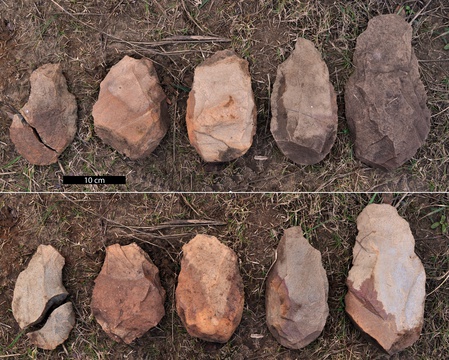 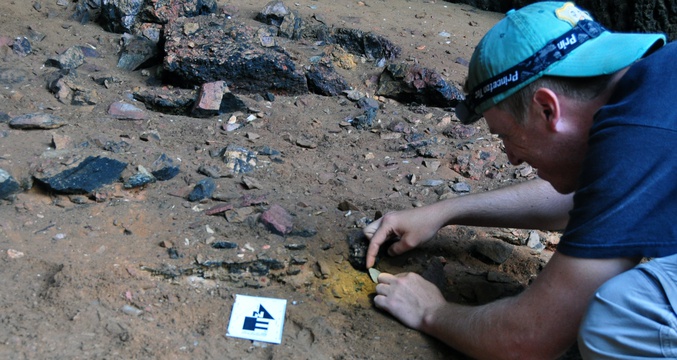