Geology of the Knysna Basin

A brief introduction to the geology of the Knysna Basin, with a look at how the landscape was formed

Special thanks to Fred van Berkel, geologist (rtd.) for information and diagrammes

The scenery and geomorphology of the Garden Route south of the Outeniqua Mountains formed as a result of - and after - the final stage of the break-up of the supercontinent Gondwana, which took place during the early Cretaceous, about 110 Ma (Ma = million years ago).

Simply put, the Agulhas Plateau slid westwards along a major fracture in the Earth’s crust known as the Agulhas Falkland Fracture Zone (which formed around 90 Ma), and this laid the foundation for the creation of the landscape which we now know as the Garden Route - which, of course, includes the Knysna basin.

Of course, the actual story’s a bit more complicated than this. So let’s take a look at the ages of the rocks of the Knysna Basin, and then we can have a look at how they all fit together:

Rocks in the Knysna area

The rocks of the Knysna Basin and surrounding areas belong to the following categories*:

*The geologist’s convention when discussing the stratigraphy - the order in which rocks were formed - is to begin with the oldest and work up to the youngest. 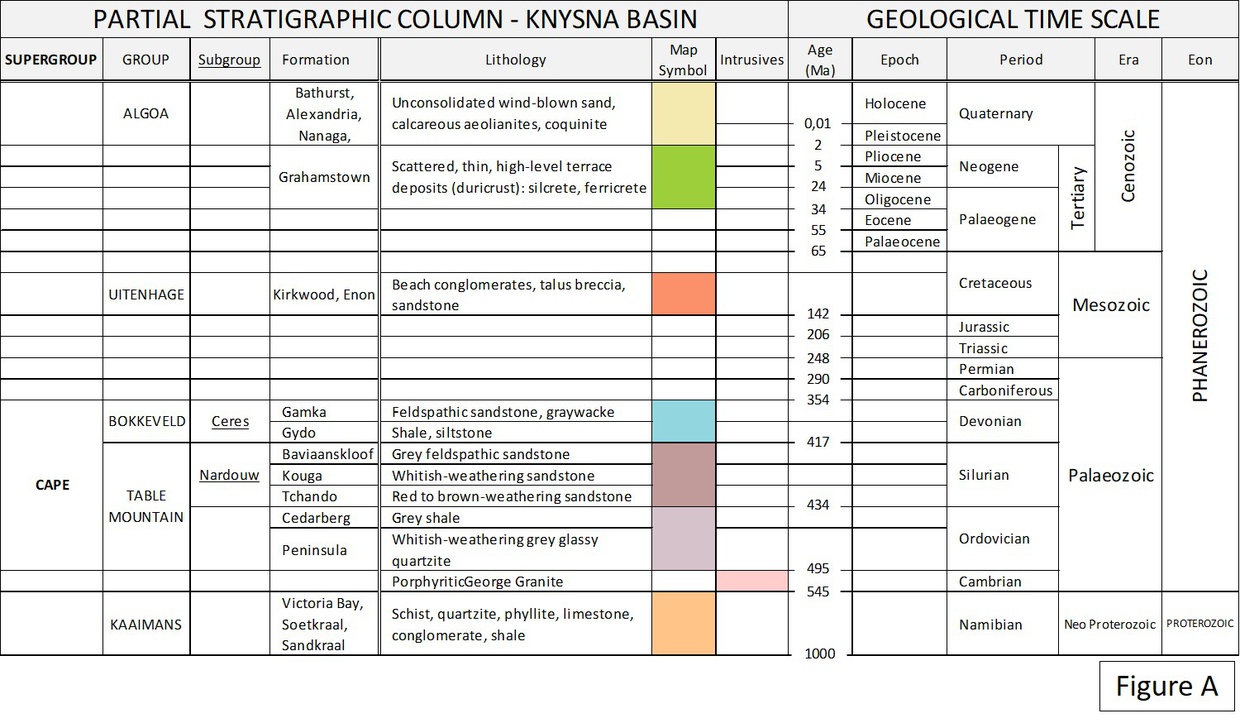 FIGURE A: A partial geological stratigraphic column on the rocks of the Knysna Basin 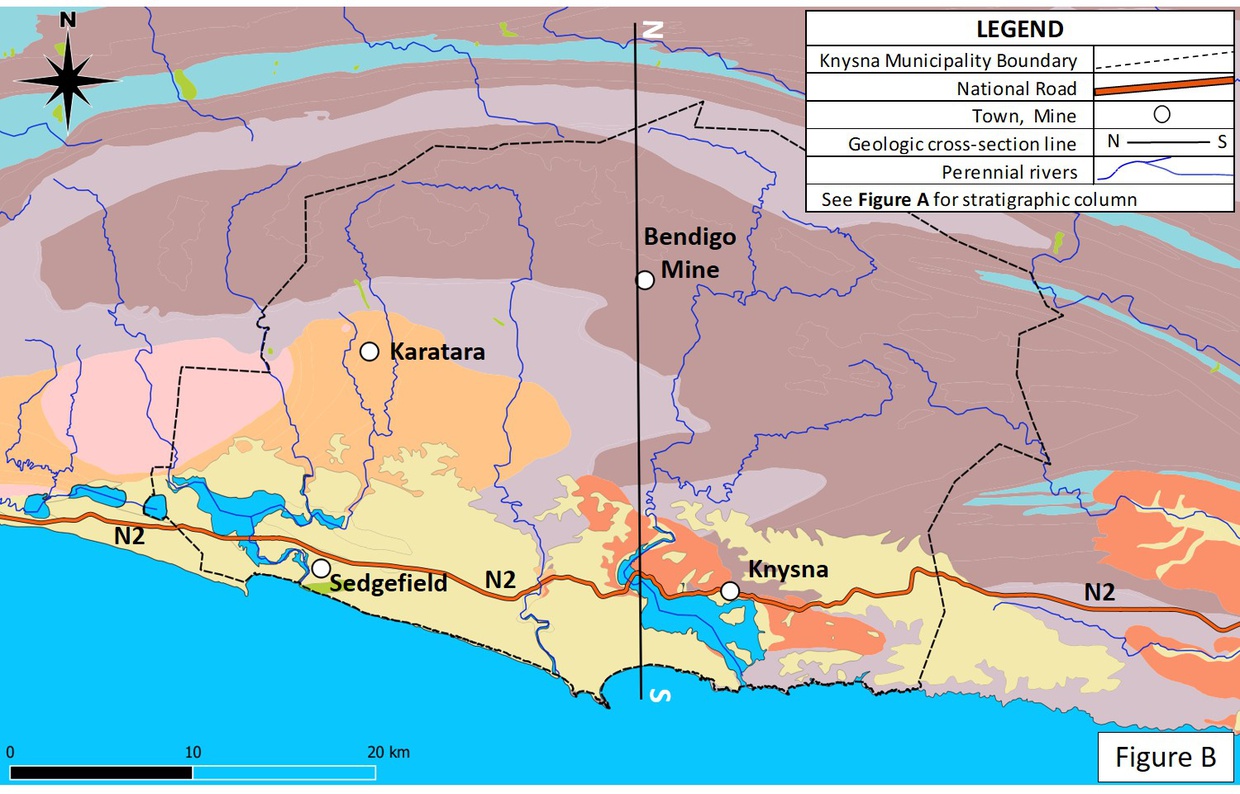 FIGURE  B: Geology of the Knysna area 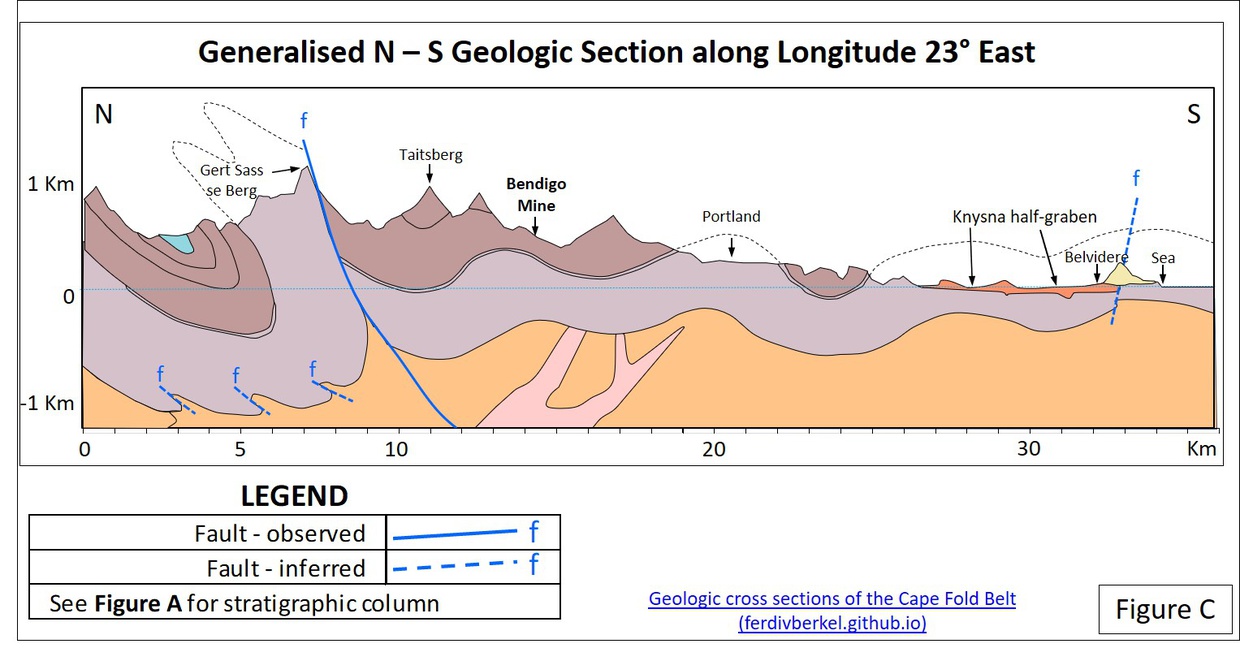 Ages of the rocks underlying the Knysna Basin

Please refer to Figure A

The Knysna basin is fringed to the north by the Outeniqua Mountains, which form part of the Cape Fold Belt, which was formed in the Permo-Triassic age (289 - 230 Ma).

At 1,565 meters above sea level, Cradock Peak is the highest mountain in the Outeniquas - but when they were at their highest (in the late Permian, around 258 Ma), these mountains would have thrust up to as much as six- to seven km above current sea level.

Although the folding in the Outeniquas occurred in the Permo-Triassic age (289 - 230 Ma), the scenery and geomorphology of the terrain south of the Outeniquas formed as a result of and subsequent to the final stage of the break-up of Gondwana during the early Cretaceous (about 110 Ma). 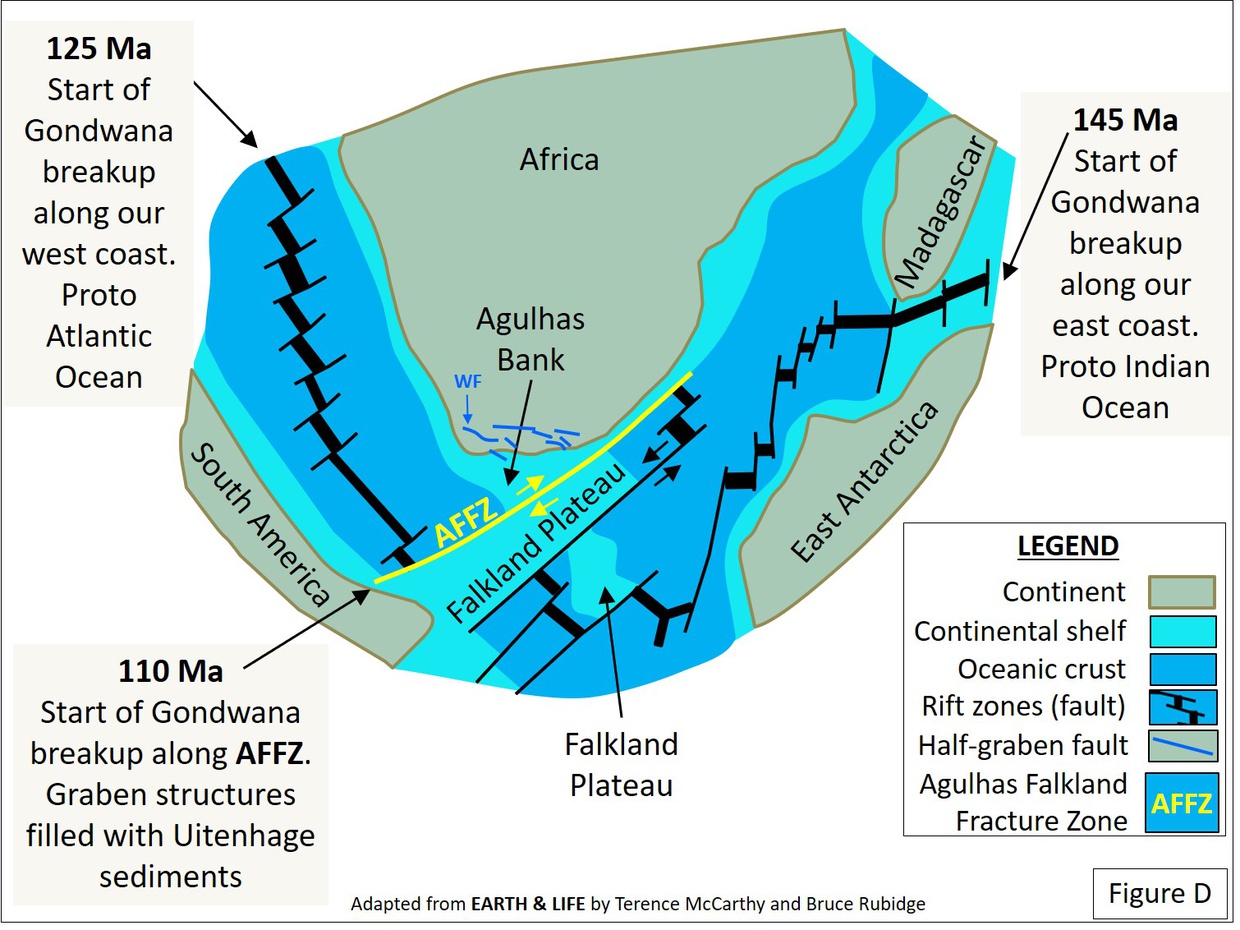 The enormous frictional forces of two thick crustal plates sliding and grinding past one other stretched the Earth’s crust along the coastal region of what is now South Africa. This resulted in the formation of numerous crustal fracture zones in a northwest- to southeast orientation along our coastline.

Inland, these extensional forces resulted in the formation of major fault zones that lie in a west-east direction, with small graben and half-graben structures (down-thrown blocks) forming on the south sides of the faults.

During the wet tropical climate regime prevalent in the early Cretaceous (145 – 125 Ma), Uitenhage Group sediments filled the offshore Outeniqua Basin with a mixture of marine sediments and terrestrial sediments derived from the erosion of the Outeniqua Mountains. These sediments reach a thickness of up to 8 km in places and are today a source of natural gas. Onshore, Uitenhage Group terrestrial sediments (Enon and Kirkwood Formations) filled fault-bound basins which formed valleys that drained the mountain ranges of the Cape Fold Belt.

It is speculated that the Knysna basin is underlain by a shallow northwest-southeast trending half-graben structure filled with Enon conglomerates belonging to the lowermost member of the Uitenhage Group (see Figure C). Spectacular outcrops of Enon conglomerates, sandstones and siltstones can be seen in the red cliffs along the N2 (lagoon road) between the White Bridge and Knysna, with similar outcrops along the road from the White Bridge to Brenton-on-Sea (between Knysna Chalets and Pembreys Restaurant), and along the Phantom Pass road north of the White Bridge. 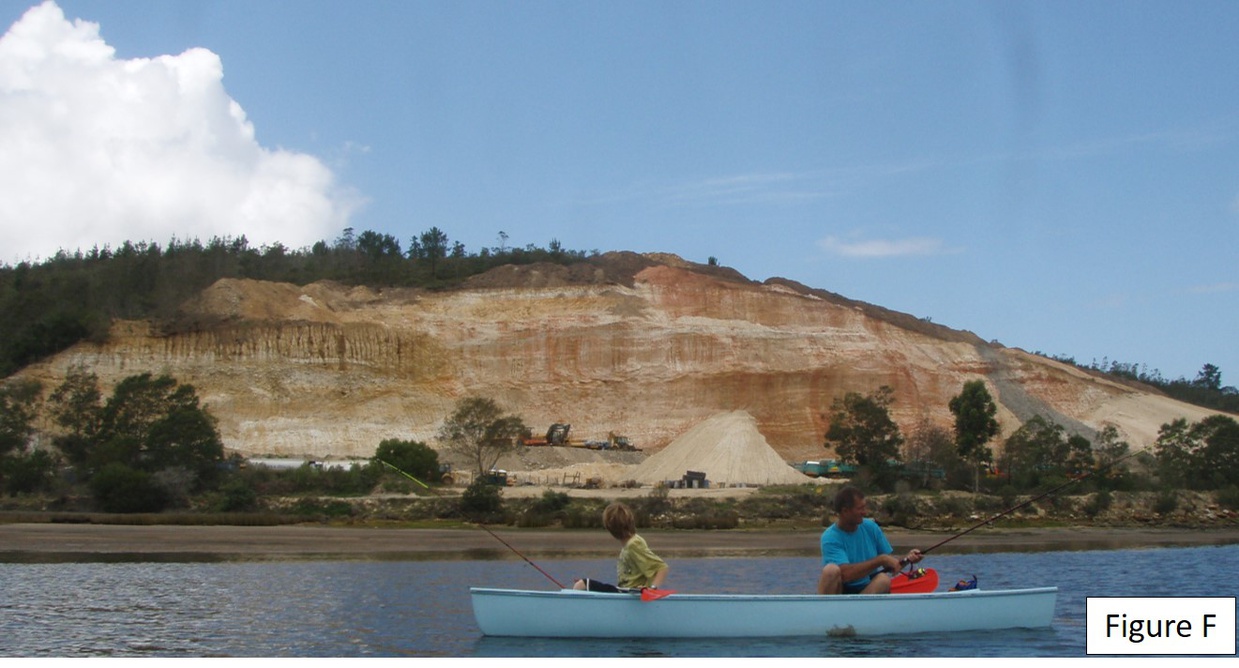 Our coast was lifted by some 300 metres in the period from about the early Palaeocene (60 Ma) to the mid Miocene (20 Ma), exposing the continental shelf to erosion. This exposed shelf is commonly known locally as the coastal plain, or the wave-cut platform. (See Google Maps - Figure G below) 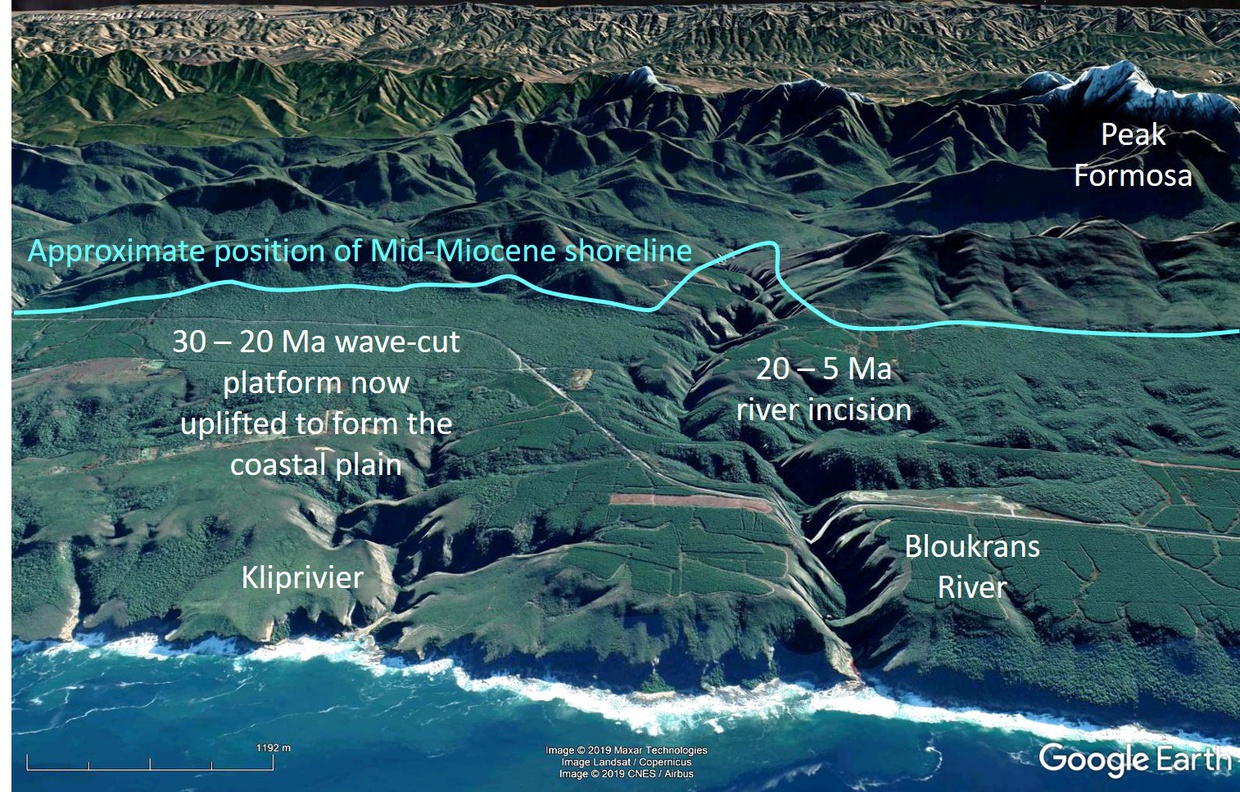 This uplift rejuvenated the erosion cycle, resulting in the deep incision of the rivers draining the Outeniquas during a wet-climate cycle, and removing the bulk of the Enon conglomerate that formed the valley fill.

Our coast uplifted a further 200 metres - causing yet further deep incision of the coastal plain - during the Pliocene (8 Ma).

Landscape features that formed from the end of the Pliocene (2 Ma) to the present day are driven by climatic and glacio-eustatic sea-level movements caused by the onset of glacial and interglacial conditions in the northern hemisphere. (Glacio-eustasy: changes in sea level due to the uptake or release of water from glaciers and polar ice.)

Sea levels dropped several times by up to 120 m below present-day during glacial periods in the late Pleistocene. When the coastline was located about 90 km south of its current position, large sand-covered tracts of the continental shelf were exposed to wind erosion. The lower portions of today’s coastal rivers were incised during these low sea level stands.

The channels thus formed, and now preserved on the continental shelf, were partially filled again with alluvial and estuarine sediments during subsequent periods of high sea levels that were associated with global warming.

Marine benches and sea caves found in today’s coastal cliffs formed during lengthy periods of sea level still-stand, which ocured during the overall decline in sea level that took place during the Late Pliocene Interglaicial (130,000 - 120,000 Years Before Present) and the Holocene Interglacial (which started around 11,000 YBP) .

As a result of the glacial periods of the late Pleistocene, our coastline moved to-and-fro by up to 120 km seawards. This movement exposed vast areas of sand-covered continental shelf to wind erosion. Extensive dune fields formed on the shelf and along our coast during these cold and dry times.

Watch the video below for a longer look at the phenomenon of plate tectonics, or watch from 4:10 for a look at the last 140 million years. You'll clearly see how the landmasses pulled apart to form the geography of the Garden Route as we know it today.