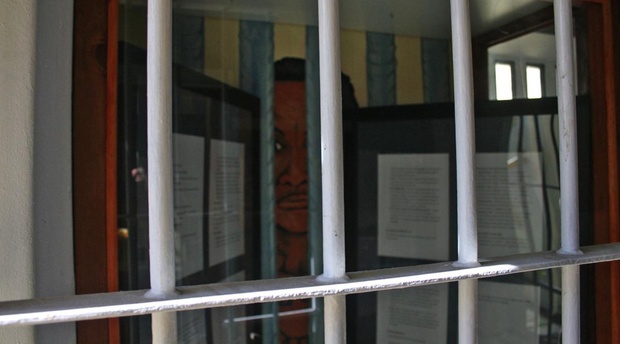 The infirmary was the Old Gaol’s hospital cell - now kept partly as it was, it also houses a display about South Africa’s prison gangs.

When it was originally built, the infirmary was the Old Gaol’s hospital cell, with beds for two patients. It’s thus not typical of the cells as they would have been and, given the fact that running water was only piped into the Old Gaol for the first time in 1902, it’s safe to assume that the shower and toilet in the cell were added sometime in the early 20th Century.

Although we have no record of gang activity in the Old Gaol, the gangs are a very real aspect of life in many South Africa’s prisons today.

Although they’re usually very secretive about themselves, and therefore not well studied, the ‘Numbers’ - the 26s, 27s, and 28s - are probably the best-known of the prison gangs. Each has its own code of conduct and chain of command.

The Numbers were originally founded sometime in the late 19th Century - probably between 1880 and 1890, reportedly when a nomadic man known only as Po met two youngsters - Nongoloza and Kilkijan - who wanted to find work on the gold mines on the Witwatersrand.

Knowing that the living and working conditions in the mines were appalling, and that many of the young men who went into them mines died in them, Po convinced Nongoloza and Kilkijan rather to adopt a life of crime, teaching them, for example, to rob coaches and steal from the mineworkers. Po then recruited 15 more youngsters, assigning them to work with his two protégés - 7 to Nongoloza, and 8 to Kilkijan - and instructing them to work at different times: Nongoloza’s group at night, Kilkijan’s during the day.

Nongoloza and Kilkijan parted ways when Nongoloza was found having sex with another man, but they met up again when they were both incarcerated in Durban Prison in about 1907 or 1908. Here Nongoloza tried to take 6 men as sex slaves for himself, but after Kilkijan explained to them what his rival wanted to do, they formed a gang of their own: the 26s.

The numerals in the gangs’ names are therefore said to represent the two leaders and their followers: 2+6, 2+7 and 2+8.

Assignment to the Numbers

The gangs assign new prisoners to the Numbers according to their crimes:

Rules of the Numbers: the 26s

The 26s are said to specialise in robbery and smuggling (money, drugs, cigarettes, etc.), and usually work as cleaners in the prisons. They’re known to avoid violence whenever they can, and members who develop a reputation for violence are expected to leave and join the 27s. Members can also leave to become 27s if they wish to communicate with the 28s.

The 26s refuse sex with other men, and no inmate who has been raped may join this number. Men who have sustained head injuries in prison can only join the 26s if they ‘take back their blood’ by stabbing a warder.

Rules of the Numbers: the 27s

Known as the men of blood, and the most violent of the Numbers, the 27s are the most secretive members of the secretive sub-culture of the prison gangs.

The 27s monitor and enforce the laws and codes of the Numbers, and may negotiate and mediate between the 26s and the 28s. Like the 26s, they refuse same-sex relationships; 28s who do not practice homosexuality can therefore become 27s, although only after ‘taking a lot of blood’ (perpetrating a number of violent crimes).

Rules of the Numbers: the 28s

The 28s are known to have sex with other men, and may be raped in the gang. They prefer working in prison kitchens. Members of this gang are further divided into a Gold Line (the men who take blood), a Silver Line, and a Third Division.

The Numbers have a system of secret codes, language and symbols (including tattoos, colours, and flags) which are collectively known as the Sabela. Each gang teaches its new recruits its own history, values, traditions, and policies, and members who transgress them are usually severely punished.

The Numbers are known for their extensive tattoos. Some of these may include: