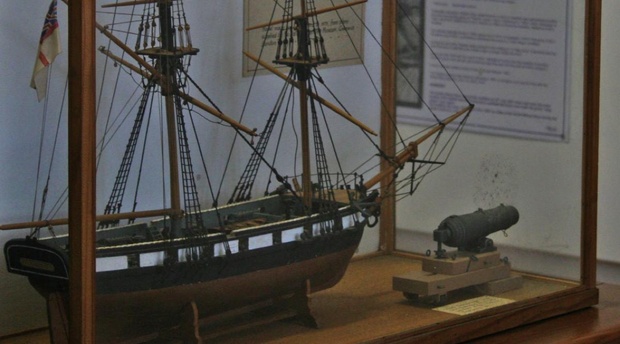 Our collection of old maps of the Knysna Estuary, and of models of ships that sailed from here

James Callander made the first known map of the Knysna Estuary in 1798. Our collection includes maps by artists who’ve been inspired by the Knysna lagoon - and by surveyors who’ve mapped it for the use of the mariners in the days when it was used as a harbour.

The museum houses models of the ships Knysna, Outeniqua, Albatros, Podargus, and Agnar, as well as two unidentified ships models (on loan from the Thesen Collection), and a scale model of a triple-expansion marine engine.

Please read on for their stories...

Brig - definition: “A full-rigged brig is a vessel with two square rigged masts (fore and main). The main mast of a brig is the aft one. To improve maneuverability, the mainmast carries a small (gaff rigged) fore-and-aft sail.” (Wikipedia)

Our model of the brig Knysna - which was the first ship built in the area - was made by Mr. Roland Cresswell Benn, the great-grandson of the famous pilot at The Heads, John Benn. The model was made from stinkwood recovered from the slipway that the farmer, trader, and timber merchant, George Rex, had built in 1826 on the river bank near the present-day Rexford, and on which he laid the ship’s keel.

The model was presented to the Knysna Municipality on the 20th of September, 1951.

The 139 ton Knysna set sail on her first voyage on 26 July 1831 under Captain D. Watt, bound for Table Bay. George Rex had built the ship in response to the fact that the government had closed the Pilot Establishment at The Heads, which led to a decrease in shipping to and from Knysna.

“The inevitable result was a rise in freight and insurance charges, and a loss of business which seriously affected George Rex’s establishment, brining in its decline a subsequent economic decline in the whole area.” (Knysna the Forgotten Port - the maritime story, by Margaret Parkes and V.M. Williams, Emu Publishers, Knysna, 1988)

Construction of the Knysna was supervised by Captain Watt, with the work was carried out by a Captain James Smith as master shipwright together with a second shipwright, two caulkers, a joiner, a blacksmith, and several labourers.

The Knysna had a long and successful career as a trader and general workhorse all along the coast. Amongst others, she was chartered in 1836 by the Government to investigate the Buffalo River as a potential harbour (it would later become the port of East London).

The Knysna was sold after Rex’s death to a Cape Town merchant, George Hodgskin, who continued to trade with her along the South African coast. She then changed hands again (bought by another Cape Town businessman, Thomas Lawton), until finally she was sold to Captain Peter Gibson of Harrington, in England. Working out of Cork, Captain Gibson traded with her between Ireland and England for five years, until she ran aground on the 14th of November, 1844, at Crackington Haven, near Bude in Cornwall, while sailing from Westport to Bristol.

Schoooner - definition: “a type of sailing vessel with fore-and-aft sails on two or more masts, the foremast being shorter than the main and no taller than the mizzen if there is one.” (Wikipedia)

The 117 ton Albatros was the ship on which the Thesen family arrived in Knysna from Norway.

Their business - Thesen & Co. - would go on to make its mark in coastal shipping, hardware stores, supermarkets, whaling, gold mining, railway construction, saw-milling, and road transport - amongst others.

The story of the family's arrival in the town has become the stuff of legend: when a recession in trade and shipping caused by the German-Danish War of 1864 – 1867 also caused the collapse of several companies in Stavanger - including Arndt Leonard Thesen’s A.L. Thesen & Co. - Arndt decided to sail for New Zealand in search of better prospects.

Accompanied by his wife, Anne Cathrine Margreta Brandt, seven sons, two daughters, his brother Mathias, Mathias’ son, Hans, and a crew of seven, Arndt sailed on 14 August, 1869, carrying on the Albatros a cargo of timber which he expected to sell on their arrival in their new country.

They tied up in Cape Town on 16 November 1869, remained for a week for repairs and provisioning, and then departed on the next leg of their journey. But they were hit by storms at the Cape, and Arndt was forced to turn back to Cape Town.

Here, Arndt learned from the Swedish-Norwegian consul, Carl Gustaf Åkerberg, that there was a desperate need for cargo ships to ply the South African coast and, after accepting a charter to bring a load of cargo to Knysna - and, after a few other, similar, succesful charters, he decided to forego New Zealand altogether, and make Knysna the family’s new home.

Under the management of Arndt’s son, Charles Wilhelm Thesen, the Thesen’s Steamship Company became one of the best-known lines trading between Knysna, Namibia (then South West Africa), and the Indian Ocean islands, with a total of eight vessels - and the SS Outeniqua (see below) as its flagship.

The 1,019 steamship Outeniqua, which was built in 1915 by Porsgrund Mekaniske Værksted in Porsgrunn, Norway, was the flagship of the Thesen’s Steamship Company. She had accommodation for fifty passengers, and a ladies saloon and dining room on deck.

The Outeniqua carried her first cargo - of creosote - from Goole (near York in England) to Knysna, and was then put into the coastal trade.

She “had many a mishap in her career, and when she was finally scrapped in Walvis Bay in 1945, it was said she had more cement than plates on her bottom.” (Knysna the Forgotten Port).

HMS Podargus was commissioned into Britain’s Royal Navy in 1808. She saw action in the Gunboat War between Britain and Denmark before being stationed at Saint Helena for about five years, and then returning to Britain in 1820. She was laid up at Portsmouth, and then finally sold in 1833 to a John Small Sedger, of Rotherhithe, who broke her up.

She’s famous in Knysna, though, for being the first vessel known to have successfully crossed the bar (i.e. enter the Knysna Heads), when she came here to salvage the cargo from the wreck of the the Cape Town Dockyard’s brig, Emu.

The Emu had struck a rock in The Heads on the 11th of February, 1817, and her crew had run her ashore in the Knysna Estuary, on the sandbanks close to the present-day Leisure Island. After thoroughly surveying the mouth of the lagoon, the captain of the Podargus, Commander James Wallis, determined that the navigable channel lay close to the Western Head, and he sailed the Podargus safely into the Knysna late in April, 1817 - thus opening the Knysna River for shipping. (An aside: the canon at the door of the Knysna Museum’s Maritime Collection is thought to have come from the Emu.)

The 427 ton steamship Agnar was built by Stavanger Stöberi and Dok in Stavanger, Norway, and was purchased by Hjalmar Thesen for the Thesen’s Steamship Company in 1894.

She arrived with a cargo of coal in Cape Town on 4 September, 1895.

“Sometimes referred to as the ‘Knysna Mail Packet’ (and by some, especially the Knysna children when it carried them away from Knysna to school as the’Agony’),” she served “the Thesens and the people of the port and elsewhere along the coast, for a period of nearly forty years.” (Knysna the Forgotten Port).

The Agnar was fitted with accommodation for eighteen first-class passengers at the time of purchase: the Thesen’s Company added 3rd class accommodation below decks. Besides regular coastal trading, she saw service in both the South African War (2nd Anglo-Boer War, 1899-1902 - when she transported, amongst others, recruits for the SA Light Horse) and during the 1904-1907 Herero Revolt in German South-west Africa (now Namibia)>

She was sold in 1934 to a company in Madagascar, and disappeared without a trace in a cyclone in 1938.

These models are exhibited by the Knysna Museum on loan from the Thesen Collection.

A triple-expansion engine is a compound engine whose cylinders operate at three different pressures. (Wikipedia ) . Please see the video from the Science Museum London below.

The model of the triple expansion marine engine in the Knysna Museum’s collection was built by the late Mr. A.B. Bullock of George, and is exhibited on loan from his family. 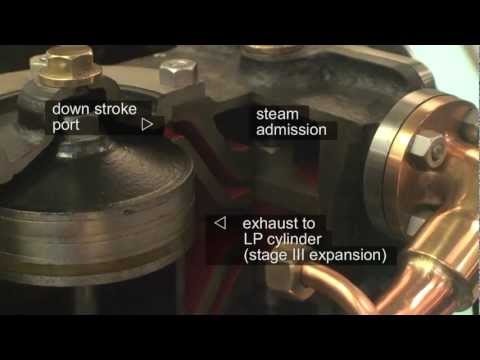