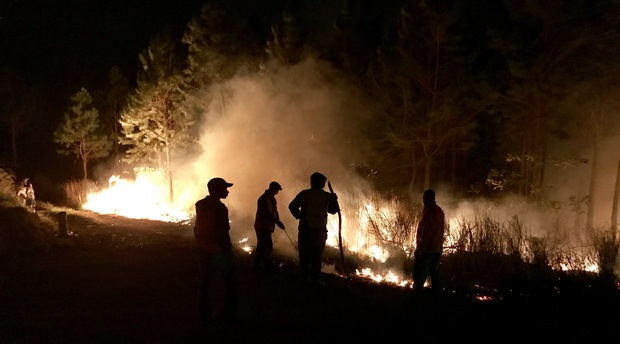 Fires that raged from the 7th of June, 2017, in the Knysna and Plettenberg Bay area claimed the lives of seven people, devastated 16,000 hectares of plantations, fynbos, and urban areas, and caused billions of rands of damage to infrastructure and property.

For weeks before the Knysna Fires of 2017, foresters had feared the worst: the area was experiencing an extended period of extremely warm weather, rainfall in the past months had been well below average, humidity was particularly low, soil moisture was depleted, and the vegetation was showing signs of severe drought. In the week leading up to the event, though, it looked like a cut-off low was developing which, everyone thought, would bring heavy rain and flooding – so much so that schools in the Western Cape were told in advance to close for the day.

In the early hours of the 7th of June, though, gale-force north-westerly winds of up to 90 km/h began coursing through the district – with wind gusts of up to 120 km/h recorded during the day. (120 km/h is considered hurricane strength, which had never before been recorded in the Southern Cape.)  Air temperature rose to 28 degrees, and humidity fell to 8% and, although other parts of the Western Cape did indeed experience flooding, the Knysna/Plettenberg Bay area was, instead, hit by a firestorm of immense proportions.

The fires started in two places: at Elandskraal, north-east of Sedgefield, and in the MTO Kruisfontein plantation just east of Knysna. Both were fueled by the monoculture of the plantations, and by the very high incidence of invasive alien vegetation (black wattle, rooikrans, Port Jackson wattle, blackwood, gum, pine, etc.) in large areas of the region. The enormous strength of the wind lifted burning material and threw it far distances in front of the fires, causing spot fires to break out in other plantations, in fynbos areas, in scrub forests, and even, in some cases, in the indigenous forests. (The multi-species indigenous forests are usually resilient to wildfires, but in cases where spot fires begin in this way, and if no rain occurs, they can smoulder for weeks, causing underground fires that can topple large trees.)

The fire to the west of Knysna burned huge areas within hours, and began in the early afternoon to threaten the urban edges of Knysna – an area that had previously been considered ‘safe’ under ‘normal’ fire conditions. Within half an hour of crossing the Knysna River, the flames had entered those urban areas, and, fanned by the powerful winds, began consuming every burnable thing in their path.

The urban population was quite unprepared for the disaster, and hurried to evacuate ahead of the flames.

The heat is said to have been so intense that it melted the engine blocks of motor vehicles caught in the fires. No human interventions seemed able to stop the flames. Strong winds and dense smoke on the first day made fire-fighting by helicopter impossible, and everyone’s focus was simply on evacuating friends, family, and strangers in order to save lives.

Stories of bravery in the face of terrible odds are legion: the NSRI, for example (National Sea Rescue Institute Knysna Station 12), sent its boats and crews to Belvidere to bring trapped residents and their pets across the lagoon to safety, while its mobile units helped wherever they could. And in Buffalo Bay, a convoy of 4x4 vehicles driven by volunteers gathered to evacuate the residents of Brenton-on-Sea – which was accessible from the beach, but not by road.

Although access to Knysna was difficult (indeed, the N2 national road was closed at Elandskraal for days), almost 1,200 firefighters from around the country were deployed to help fight the fires. These included firefighters and reserves from the local and district municipalities, as well as from Working on Fire (WOF), amongst others. WOF dispatched 498 crew to Knysna, and another 300 to Tsitsikamma, on the first morning alone, and would deploy 14 pilots, 3 spotter planes, 3 helicopters, and 2 Air Tractor AT-802 water bombers which, between them, would fly 230 operational hours during the disaster.

The fire was fought in a coordinated response with a Joint Operating Committee (JOC) and a Multiple Agency Committee (MAC) reporting to a Unified Incident Command. (The MAC was made up of representatives from the South African Defence Force, the local and district municipalities, SASSA – the South African Social Security Agency – the Red Cross, SANParks, local Fire Protection Associations, etc.).

In the aftermath of the event, official estimates put the number of dead at seven, and the number of people displaced at 10,000 (most of whom were able to return to their homes when the theat passed).

Damage to infrastructure was estimated at between R4- and R 5 billion.

Gift of the Givers

The humanitarian response to the tragedy was swift. Amongst the first of the aid organisations that arrived in Knysna to help was the Gift of the Givers Foundation, whose team provided major support in organising the relief effort. Amongst others, it brought emergency services personnel, paramedics, medical specialists, two ICU ambulances, medical equipment, and medical supplies into the area, and it helped with food parcels, bottled water, hygiene packs, blankets, mattresses, pet food, and more.

In total, Gift of the Givers spent more than R20 million in cash and kind in the first month after the disaster, making the Knysna Fires the Foundation’s largest local disaster response in its (at that time) 25-year history

Three examples will illustrate the broad extent of the Knysna community’s own response to the disaster:

Naturally the hashtag #KnysnaFires went viral almost immediately. In response, Knysna Tourism put out the hashtag #KnysnaRises in order to counteract any negativity that might arise (for example, amongst holidaymakers and visitors who had booked accommodation for dates in the period after the fire – including during the annual Knysna Oyster Festival – but who were considering cancelling their bookings).

#KnysnaRises became the most successful social media programme that Knysna Tourism had conducted up to that time, and the hashtag and its iconic orange and green colour scheme appeared on advertising material and merchandise for months after the event. It was also a strong motivator behind the production of the book, ‘Knysna Fire Stories,’ which was sold to help with “the establishment, training, equipping, and ongoing development  of the Knysna Fire Rangers, who will contribute to the manpower needs of local Disaster Management.”

The Garden Route Rebuild Initiative (GRRI) was established in August 2017 by the premier of the Western Cape, Helen Zille, as a partnership between the Eden (Garden Route) District Municipality, the Knysna and Plettenberg Bay Municipalities, and provincial and national Disaster Management Centres, as well as state-owned enterprises, private sector contributors, and members of the local communities.

Reconstruction goals were divided into six workstreams – humanitarian assistance; reconstruction; environmental management; business support; infrastructure rehabilitation and construction; and skills development – but the first order of business was saving lives and livelihoods from further risk. Initially, the fear was that the fires would be followed by heavy winter rains, which would have caused flooding that would have eroded significant areas of land that had been stripped bare of its protective coat of vegetation. The most visible signs of the GRRI’s work, therefore, were the enormous ‘eco-blankets’ (biodegradable mats) that were laid out on steep hillsides and gullies throughout the district – with more than 6.4 square kilometres installed down by the end of August, 2017. (In the event, follow-up rains proved gentle and very welcome. and very little erosion damage occurred.)

Other interventions facilitated by the GRRI included fast-tracking of the building approvals process, and various on-the-ground projects that enabled job creation: the whole focus of the initiative being to ‘Build Back Better.’

What caused the Knysna Fires?

Using all the data at its disposal, simulation modelling by the Council for Scientific and Industrial Research (CSIR) found that the origin of the fire west of Knysna (the Elandskraal fire) was a burn lit weeks before by lightning that hit dense scrub forest on the valley slopes of the Karatara River.

That fire was never extinguished, and dry, hot, powerful winds in the early hours of 7 June, 2017 caused it to flare up and spread.

According to an article written by retired forester, Theo Stehle, though, the problem comes from deeper roots: “Changes in land and fire management over the past 30 years – plus climate change – are the real causes of catastrophic wildfires in the Cape.” (‘Garden Route fires: where to now?,’ SA Forestry Online)

It should not be forgotten that the 2017 fires were followed by another series of fires in late October and early November of the following year, when six fires burned out of control in the Outeniqua Mountains. These fires killed eight people (all residents of a single forestry village), burned more than 100,000 hectares of plantations and fynbos in the Outeniqua Mountains and in the Tsitsikamma and Riversdale districts, and destroyed one sawmill and various other structures.

The 2018 fires were exacerbated by conditions similar to those that preceded the 2017 Knysna Fire: despite good rains in September, 2017, rainfall for the year to October, 2018, was below average; the region experienced a period of unusually warm weather in winter, followed by a heat wave in October that lasted for more than a week; temperatures rose to a high of 40 degrees in Knysna (an unheard of phenomenon), and the region experienced winds of up to 100 km/h.

Both the 2017 Knysna Fires and the 2018 Outeniqua Mountain Fires have been compared to the Great Fire of 1869, which burned vast areas of the Garden Route between George and Humansdorp in February of that year (see ‘The Great Fire of 1869’ on this site).

This comparison does not stand, however, because, while the 1869 fire was indeed driven by berg winds, the land was sparsely populated, and the fuel loads were much lighter than they were in 2017 and 2018. There were no single-species plantations at that time, and there were no invasive alien trees growing in the area: the fire therefore burned only the natural vegetation. Consequently, the temperatures of the 1869 fire would have been lower than those of the 2017 and 2018 fires, and the damage to the environment would have been less severe.

This article in the series 'Our Recent Past' was written for the Knysna Museum by Martin Hatchuel - July, 2022 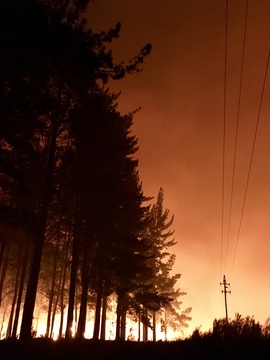 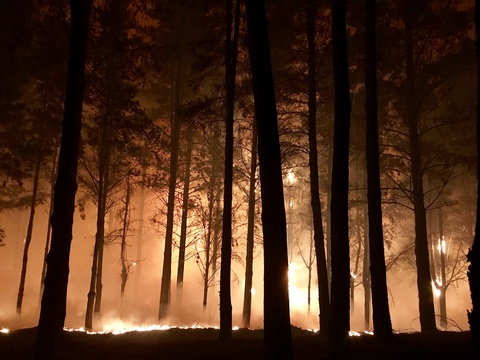 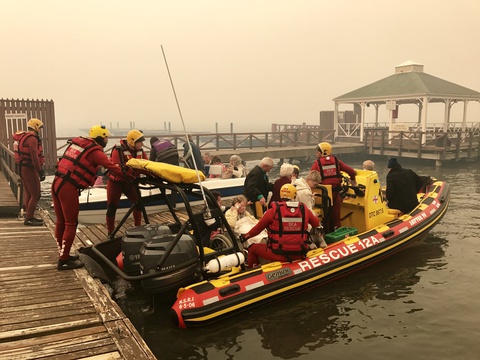 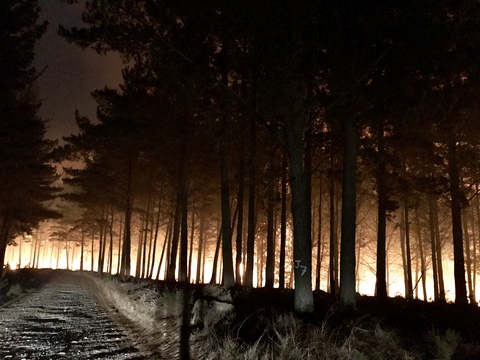 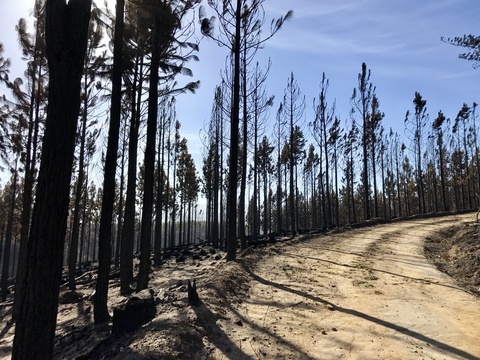 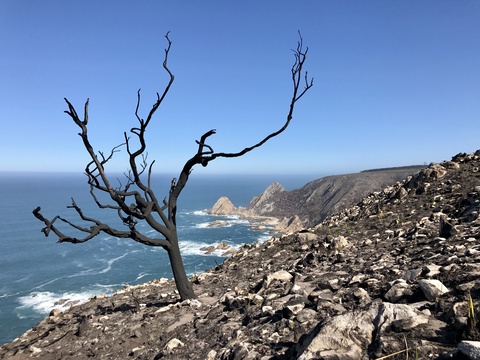 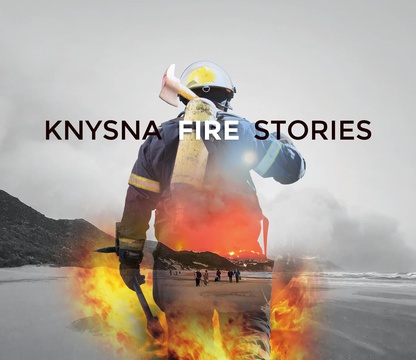 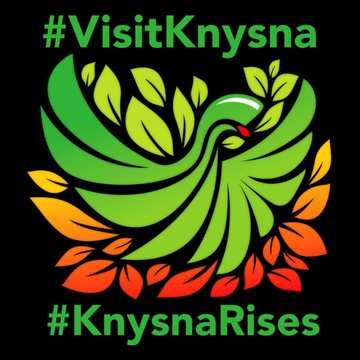 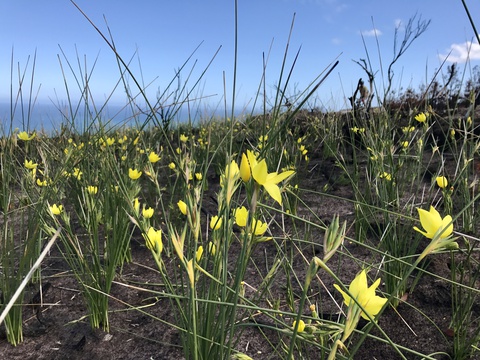